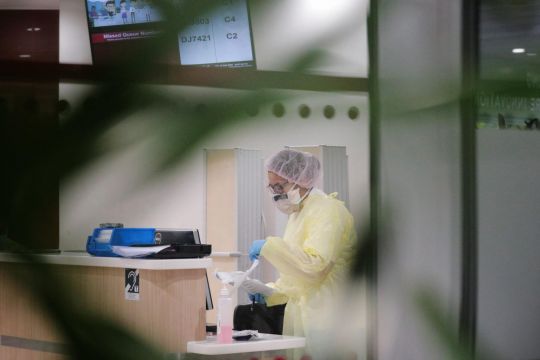 (Singapore, Apr 28, 2000) Singapore has been conducting more COVID-19 tests per 100,000 persons than that of the US or the UK, Singapore’s Ministry of Health has announced.

The MOH also says that testing is a critical enabler of its fight against COVID-19 and the city-state’s Multi-Ministry Taskforce has been steadily building up our national capacity to conduct tests for COVID-19.

“We have taken steps to continue building up our testing capacity over the coming weeks and months. Even as we do so, we will continue to prioritize our existing testing capacity based on public health considerations,” MOH says in its statement.

It says that testing is used for diagnosis to provide the appropriate treatment early for persons who are unwell. Besides, testing is also important for active case finding to identify infected individuals early and isolate them. Contact tracing around confirmed cases allows the MOH to ring-fence any clusters, and prevent further transmissions.

Also, testing, which is being done systematically across our hospitals, polyclinics, and general practitioner clinics is also helpful for surveillance purposes, in particular of groups at higher risk of contracting or transmitting the disease.

“We test high-risk groups showing symptoms of acute respiratory infection (ARI), such as those who are close contacts of confirmed cases, those with travel history, patients already diagnosed with pneumonia, or patients with prolonged ARI. We also conduct testing as a means of general surveillance to detect signs of community spread and to pick up unlinked cases,” the MOH says.

A similar testing strategy is applied to the migrant worker community, including those living in dormitories. MOH says it has been testing close to 3,000 migrant workers residing at the dormitories every day and will continue to do more tests. Many of these workers showed no symptoms when they were tested.

The MOH says that in most countries, people who are asymptomatic are not tested. To date, more than 21,000 migrant workers living in dormitories have been tested. This means that we have tested about one in 15 workers in dormitories (or 6,500 per 100,000), far higher than the testing rates seen in countries like South Korea (one in 90, or 1,100 per 100,000).

“This aggressive testing regime enables us to determine the extent of infection in the dormitories. Those who are confirmed with COVID-19 infection will be reported in the daily tally of newly confirmed cases. We started with the dormitories with a higher incidence of infections, and are continuing to test the workers in the other dormitories,” the MOH says.

However,  due to the need to prioritize, MOH is not able to test all in the dormitories at one go. But if any worker were to report sick or show ARI symptoms, it will immediately pull aside and isolate the worker from his room-mates, and ensure that he receives the necessary medical care. This allows the government to provide medical care quickly to the symptomatic foreign workers, and to ensure that those with higher risk factors or have more severe illnesses are transferred to receive care at our healthcare institutions.

It says one urgent priority is to test migrant workers who have moved out of the dormitories but are continuing to work in essential services. This is to reduce the risk of transmission in workplaces and to the wider community.

In addition to migrant workers, the government is also doing more tests to protect vulnerable groups. For instance, it is testing the staff at nursing homes where there is close contact with seniors, as well as healthcare workers and frontline officers who have regular contact with confirmed cases. This will help to ensure that they continue to stay healthy and receive medical treatment promptly if required.

MOH says that as more testing capacity is brought on-stream, it will gradually expand testing to the wider pool of workers in order to ensure the continuity of critical functions and services. This is important, as it will also enable us to progressively resume economic activities beyond the circuit breaker period.

“While testing is important, it has to be part of a broader strategy to fight COVID-19.”

MOH says that testing alone cannot substitute for other important measures like safe distancing and infection control. Individual responsibility in upholding good personal hygiene, minimizing contact, and seeing a doctor immediately when sick are all critical aspects of the overall strategy.