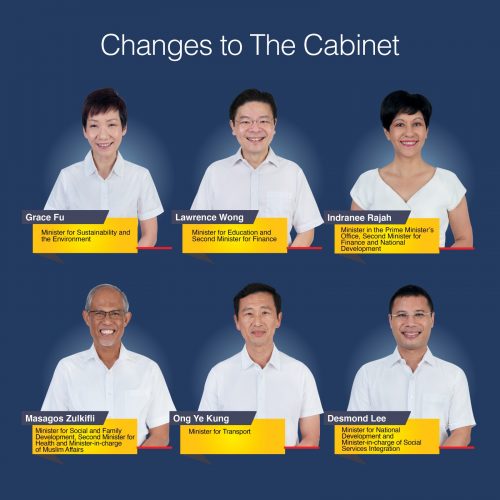 (Singapore, July 26, 2020) Singapore Prime Minister Lee Hsien Loong has over the weekend announced his new Cabinet in a reshuffle that will see six ministries headed by new ministers.

In total, the new Cabinet will have 37 political office holders, the same as the previous Cabinet.

In a press conference announcing the Cabinet line-up, PM Lee said that providing continuity, giving ministers exposure and renewal are the three factors behind his Cabinet reshuffle.

“I’m rotating the ministers, especially the younger ones to gain exposure and experience. We regularly do this during Cabinet reshuffles, and the intent is to expose the office holders to different portfolios, to gain both breadth and depth, to understand the intricacies of the issues and to see things from different perspectives,” he added.

Mr Ong Ye Kung will move from the Education Ministry to head the Transport Ministry.

Mr Lawrence Wong will move to the Education Ministry.

Mr Desmond Lee will relinquish his role as Minister for Social and Family Development to succeed him at the National Development Ministry. He is concurrently appointed as Minister-in-charge of Social Services Integration.

Mr Masagos Zulkifli will move to helm Ministry of Social and Family Development. Remaining as the Minister-in-charge of Muslim Affairs, he will take on the new role as Second Minister for Health.

In addition, Deputy Prime Minister and Finance Minister Heng Swee Keat will be taking on an additional role as Coordinating Minister for Economic Policies.